"They send men, not the boys, to deal with me in the Legislature." 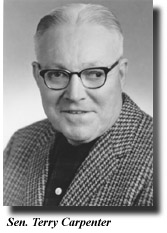 One of the most controversial people to serve in the Nebraska Legislature was "Terrible Terry" Carpenter.

News accounts bestowed many other adjectives and phrases upon the seven-time Scottsbluff-area senator: "a giant among us," "a restless spirit," "contradictory," "inconsistent," "intimidating," "mercurial," "brilliant," "self-sufficient," "opinionated," "fearless," "anti-establishment."

The man was self-admittedly full of contradictions.

"I can introduce a bill in the morning and be opposed to it in the afternoon," he said.

He changed his political party affiliation five times in his lifetime.

He was known for his sharp, silver tongue and for skillfully using legislative rules to his advantage. As a political leader, he believed his duty was to "supervise the establishment."

His unconventional leadership made many adversaries. But Carpenter’s achievements also earned him admirers. His legislative accomplishments include:

Carpenter also made a name for himself beyond the walls of the Capitol.

Born in Cedar Rapids, Iowa in 1900, he was named after a famous boxer of the time, Terry McGovern. He first moved to Nebraska in 1916 and took over a gas station in Scottsbluff, where, in the middle of the Depression, he started gas price wars with major oil companies that had stations in the area. Eventually, the major companies bought the land beneath Carpenter’s gas station and evicted him.

The town rallied around Carpenter and raised enough money so that he was able to open another gas station. When the major companies again attempted to put him out of business by cutting off his suppliers, Carpenter built a railroad spur to his station, constructed a refinery, and made his own gasoline. His gas sold for 5 cents a gallon in some areas where the competition sold it for 20 cents a gallon.

He pursued many other business ventures, from bricks and sand to cream, coal and soda pop. He was a millionaire by the age of 42.

On land he bought southwest of Scottsbluff, Carpenter erected his own town. Poor people were allowed to camp free of charge in Terrytown and were given free cream or milk. Many also found jobs there. More than 650 people reside there today.

In 1956, Carpenter took the national spotlight. He was a delegate to the Republican National Convention and startled the party by nominating an unknown Joe Smith for vice president instead of Richard Nixon.

Whatever his peers thought of Carpenter, all agreed at his death in 1978, that the man had a major influence on the lives of Nebraskans.