History of the Nebraska Unicameral

The Birth of a Unicameral

Nebraska's legislature is unique among all state legislatures in the nation because it has a single-house system. It wasn't always a unicameral, however.

"Rubber and Glass Diplomacy," a documentary produced by Nebraska students Justin Myers and Will Scheopner, tells the story of George Norris' efforts to bring unicameralism to Nebraska.

George Norris, a "New Deal Republican" who settled in McCook, wore out two sets of tires while he drove throughout the state campaigning for the measure. He said the two-house system was outdated, inefficient and unnecessary.

Norris said the bicameral system was modeled after the British Parliament, which is made up of the House of Commons, with representatives elected by the people, and the House of Lords, with its aristocratic members appointed by the king.

"...The constitutions of our various states are built upon the idea that there is but one class. If this be true, there is no sense or reason in having the same thing done twice, especially if it is to be done by two bodies of men elected in the same way and having the same jurisdiction," Norris said.

Norris's influence, the Depression and the other ballot issues summoned enough supporters for an overwhelming decision to make Nebraska's the only one-house legislature in the country. The vote was 286,086 for and 193,152 against a unicameral system. 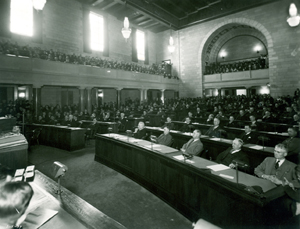 A common question raised during the consideration of unicameralism was how to preserve checks and balances to prevent abuse of power. Norris argued there would be checks and balances without a second house. The Supreme Court and the governor would rule on or veto measures deemed improper, he said.

More importantly, the people would serve as a check upon the possible abuse of power by their elected officials with the right to vote and petition, Norris said. The Nebraska Unicameral would have easy-to-follow procedures and extend greater privileges to the press to allow for greater public awareness.

"Every act of the legislature and every act of each individual must be transacted in the spotlight of publicity," Norris said.

Once a bill came out of the conference committee, it could not be changed, only approved or rejected. If rejected, another committee had to be formed to work out the disagreements or the measure failed. Today, lawmakers may propose amendments and debate them outside of committee on the chamber floor.

Some say a two-house system with its conference committee prevents hasty legislation, but the unicameral system has safeguards against this possibility. Most bills must get a public hearing; five days must elapse between a bill's introduction and its passage; and bills can contain only one subject.

Implementation of the unicameral legislature in 1937 cut government costs for obvious reasons. Legislative membership went from 133 in the bicameral to 43 in the new single house - nearly a 70 percent reduction.

Another unique aspect of Nebraska's legislature is its nonpartisanship. Before becoming a unicameral, the Nebraska Legislature was a partisan body. The change to nonpartisanship was included in the successful 1934 unicameral amendment.

Being a nonpartisan legislature means that a candidate's political party is not listed on the election ballot. The two candidates who obtain the most votes in the primary election face each other in the general election. In other states, each party selects a winner in the primary, and the winners of each party run against each other in the general election.

Unlike other states, Nebraska's legislative leadership is not based on party affiliation.

Norris, who advocated nonpartisanship said that such a body would allow senators to concentrate on local interests without being influenced by national party lines. National party lines, he argued, often have little to do with local government. A voter who votes according to party lines might vote for a state candidate who disagrees with him or her on matters over which the senator will have jurisdiction.

Norris worked to eliminate partisanship in the legislature because he believed that elected officials would stand on their own records. Nonpartisanship would allow lawmakers to base their actions on their own convictions and the needs of their districts, rather than according to party dictates.

Movements for unicameralism have existed throughout the United States since the country's independence. There were several pro-unicameral movements in the state before one finally succeeded. The same year Nebraska's unicameral legislature began operating, attempts in 21 other states to become one-house legislatures failed.

The Supreme Court ruling raised doubts about the necessity of having two houses based on population, stirring many states to evaluate their own systems. Many states looked to Nebraska as a model of an effective one-house legislature. Those states included California, Connecticut, Florida, Hawaii, Illinois, Kansas, Kentucky, Minnesota, Montana, New York, Oklahoma, Rhode Island, Tennessee and Texas. Nebraska officials visited many states to spread the word about unicameralism. Journalists and officials from other states also visited Nebraska.

The Unicameral's first clerk, Hugo Srb, predicted that lawmakers in other states would not want to legislate their own jobs out of existence. Despite the interest unicameralism has received over the years, Nebraska remains the only state with a unicameral legislature.